Assessments are the foundation to ensure no injury or abnormality is overlooked. Trauma centers across the county utilize a systematic method to ensure this is done.  The following case study will review the elements used in the Trauma Nurse Core Course (TNCC) to ensure no injuries are overlooked for this patient.

The Centers for Disease Control and Prevention (CDC) report more than 32,000 people are killed in MVCs and 2 million are injured each year from an MVC (4). Identification and thorough assessments can lead to successful TBI treatment plans, and it is of the utmost importance for trauma nurses to remain up to date on the current best practices. TBIs are commonly seen in patients after an MVC, the following case study will walk you through the assessment, physician orders, diagnostics, TBI treatment, and outcome for an MVC patient.

A 46-year-old man presents to the emergency department (ED) after an MVC.  He was a restrained passenger, +airbag deployment, and no reported loss of consciousness. The accident occurred when another car failed to stop at a traffic light and hit the victim‘s car on the passenger side. EMS reports heavy damage and difficult extraction. The victim is complaining of a headache, nausea, and R shoulder pain. Below, is your complete trauma nurse assessment:

All of the following are from a 2014 CDC report:

The following labs/radiology results are back: 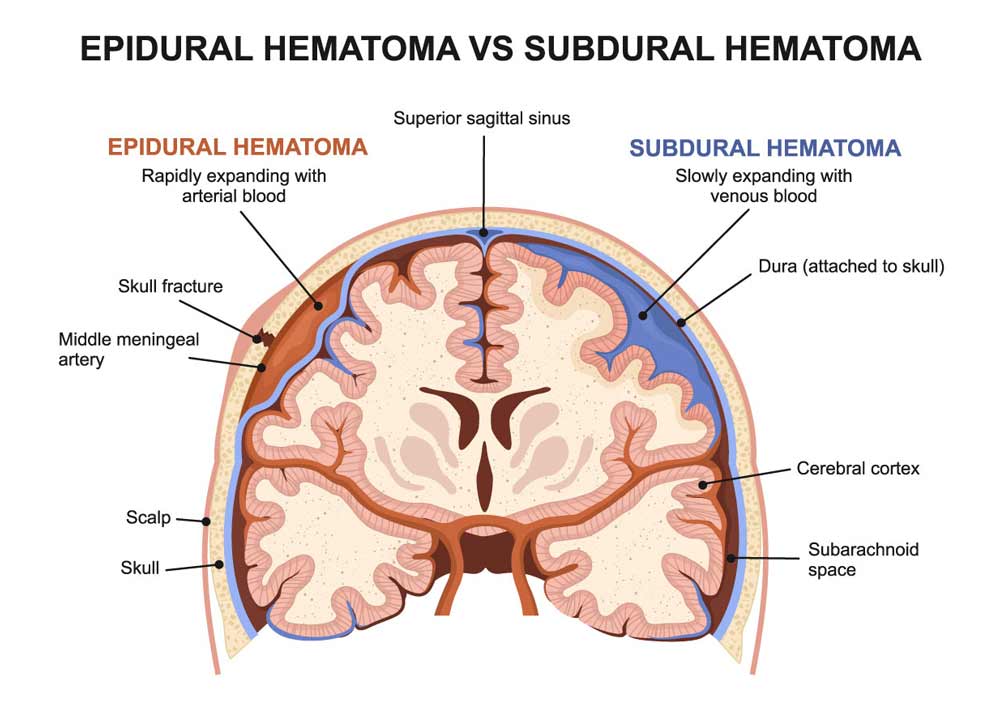 A subdural hematoma (SDH) forms when there is a venous hemorrhage into the space between the dura and the arachnoid membranes. The brain has three layers or coverings (called meninges) that lay between the bony skull and the actual brain tissue. The layers from the skull to the brain are the dura mater, arachnoid mater, and pia mater. The purpose of the meninges is to cover and protect the brain.

The blood from an SDH is usually the result of damage to the cerebral veins as they empty into the dural venous sinuses (1).  The bleeding from an SDH is under the skull and outside the brain, not in the brain itself. As the bleeding continues, it puts increased pressure on the brain, which usually causes symptoms.  As the pressure in the skull rises to a high level, a subdural hematoma can lead to unconsciousness and death (1,2,3).

A subdural hematoma is usually caused by a head injury, such as a fall, MVC, or an assault. The sudden blow to the head tears blood vessels that run along the surface of the brain. This is referred to as an acute SDH and occur in up to 25% of people who have experienced a head injury.

Symptoms are mostly based on the rate of bleeding (1):

If not identified and bleeding progresses, symptoms like seizures, paralysis, breathing issues, +LOC, or coma can occur.

A computed tomography (CT) scan or magnetic resonance imaging (MRI) are the two diagnostic interventions that are usually ordered to outline any potential TBI treatment (3).

Treatment of SDH depends on the patient severity and can range from watchful waiting to brain surgery.

If a patient has a small SDH with mild symptoms, the provider may recommend close observation and a repeated CT of the head to assess for changes.

More severe SDHs require surgery to reduce the pressure on the brain. In general, the surgeons will use one of these three techniques to treat SDHs (1):

The patient is now in the Surgical ICU and is expected to go home tomorrow; the surgeon was able to evacuate the SDH using the Burr hole method.

An epidural hematoma is an abnormal collection of blood above the dura mater, so it is located between the skull and dura mater. The middle meningeal artery is the main artery nourishing the skull and usually the causative agent in an epidural bleed; as with all arteries, it is a high-pressure system, not low like the subdural bleed and venous system.

Epidural hematomas are mostly caused by blunt trauma, especially to the temporal region, a thinner area. Patients with falls or skull fractures must always be assessed for TBI, and one should question any change in mental status as significant.  Epidural bleeds to carry some common signs and symptoms which include:

A systematic and detailed nursing assessment is critical in identifying any and all changes with patients; as you have learned many times, there are similarities with TBI. In order to provide the best TBI treatment plans to your patients, it is important to ask the right questions and complete systematic neurological assessments. Proper TBI treatment can truly make all the difference in your patient’s recovery.

Use of Course Content. The courses provided by NCC are based on industry knowledge and input from professional nurses, experts, practitioners, and other individuals and institutions. The information presented in this course is intended solely for the use of healthcare professionals taking this course, for credit, from NCC. The information is designed to assist healthcare professionals, including nurses, in addressing issues associated with healthcare. The information provided in this course is general in nature and is not designed to address any specific situation. This publication in no way absolves facilities of their responsibility for the appropriate orientation of healthcare professionals. Hospitals or other organizations using this publication as a part of their own orientation processes should review the contents of this publication to ensure accuracy and compliance before using this publication. Knowledge, procedures or insight gained from the Student in the course of taking classes provided by NCC may be used at the Student’s discretion during their course of work or otherwise in a professional capacity. The Student understands and agrees that NCC shall not be held liable for any acts, errors, advice or omissions provided by the Student based on knowledge or advice acquired by NCC. The Student is solely responsible for his/her own actions, even if information and/or education was acquired from a NCC course pertaining to that action or actions. By clicking “complete” you are agreeing to these terms of use.

Give us your thoughts and feedback

To receive your certificate

Want to earn credit for this course? Sign up (new users) or Log in (existing users) to complete this course for credit and receive your certificate instantly.